Blog A “Jumbo Slice” of History 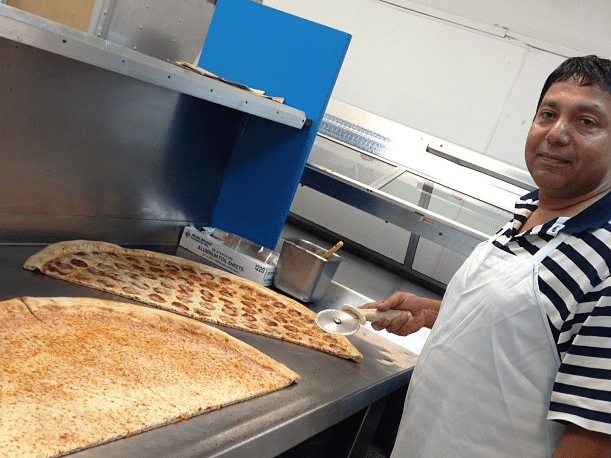 A “JUMBO SLICE” OF HISTORY— THE STORY BEHIND DC’S FAMOUS PIZZA
One morning in 1997 Shah Chisti walked into his seemingly average eaterie in the Adams Morgan neighborhood of Washington DC. Stepping up to his prep table, Shah noticed an oversized, unused ball of dough. For reasons unknown, perhaps just sheer curiosity, the pizza-maker added more dough and spread it out into one, huge pizza pie. From that point on Pizza Mart was a local sensation selling their signature, unprecedented jumbo slices.

Since its inception, the Jumbo Slice has become a staple of the Washington DC food scene and spread out to several other shops. Fellow Adams Morgan establishments like Pizza Boli’s and Napoli Pizza were quick to adopt the monstrous slices, thus spreading Shah’s creative influence around the neighborhood.

BECOMING A STAPLE
As the years have passed, the Jumbo Slice has maintained its local esteem while continuously building its national prestige. Now standing as its own culinary attraction for visitors of Washington DC, this doughy phenomenon has truly become larger than life.

Having been featured on the Travel Channel Show Food Wars several years back, the Jumbo Slice Pizza War will live on forever. Travel Channel’s profile of the split between inventor Shah Chisti and his brother did not feature a happy ending, which is sad for the family, but also an important reason why Washington DC can enjoy so many different Jumbo Slice pizza shops.